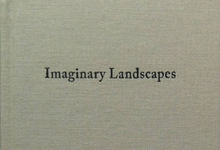 Imaginary Landscapes is a series of 80 collages/montages produced directly on 35mm slide film using a 35mm cinema tape splicer. 35mm tape splicers are designed to join film scenes together and as such can only produce straight cuts. The images in this series were compiled from a trip to various sites in the American Southwest, such as Los Angeles, Las Vegas, 29 Palms, and Joshua Tree, Grand Canyon, Bryce Canyon and Zion National Parks. Each of the original slides was shot with the horizon in the center and the image composed vertically, in the so-called "portrait" orientation as opposed to the classic, horizontal "landscape" orientation. This allowed the images to later be cut straight across their horizons and tape-spliced together with other images (fine lines from the tape are visible in each image) joining various skies and grounds. The 80 collages/montages in the series set out to achieve various goals through their splice. Collectively they populate a film set version of a strange tourist's slideshow recording a journey through a series of Imaginary Landscapes.