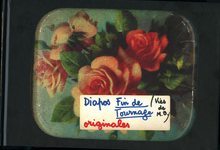 The painter, and 'lettrist' poet reuses the structure of a film he had made between 1985 and 1990. He unfolds something close to two hundred stills from different films, New Wave films mostly, that he readjusted and on which he superimposed a text, a parody of a journalistic interview on cinema, artistic creation and criticism.
©Electre 2017