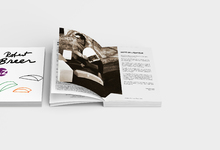 This new publication, Robert Breer A to Z, published by Light Cone Editions, is a self-portrait of Robert Breer. His life and work are presented as an imaginary lexicon, a form which he always admired as being emblematic of the joyous, unexpected, and chaotic nature of life itself.

Drawn from interviews, personal letters and public statements from 1957 to 2009, Robert Breer A to Z brings into a single volume the artist’s reflections on his films and his multiple forays into painting, drawing and kinetic sculpture.

Robert Breer has spent fifty years building up a totally atypical body of work which plays with different genres and abolishes the notions of space and time. Starting off as a painter, he then deconstructed his neoplastic works and ended up with kinetic objects. He dealt next with the thresholds of awareness and perception, both as a sculptor and a filmmaker. His films are composed of a jumble of images that pass at great speed, while his Floats move almost imperceptibly, in accordance with an unpredictable logic. Robert Breer developed his light yet rigorous style while associating with the New York underground in the Pop years. Continuing his subtle exploration of movement, his work still today causes the space of reality -irrevocably unstable- to waver.

Published under the direction of Scott Hammen with an introduction by Simon Rees, Robert Breer A to Z is co-published by Light Cone Editions and the Govett-Brewster Art Gallery.

This edition is also available as an enhanced e-Book via iBooks/iTunes (EPUB format), allowing the reader to move seamlessly between viewing – some of Robert Breer’s films are included in their entirety – and reading.

Both the printed edition and the e-Book are available in French and in English.