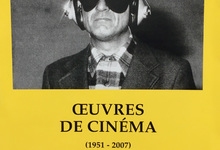 A major figure of the Lettrist movement, Maurice Lemaître, born in Paris in 1926, joined the Lettrist group in 1949 after a brief stint in the libertarian movement. He then became one of the movement's main propagators and artists, and developed a major plastic, film and literary oeuvre.

Poet, painter, sculptor, man of the theatre, novelist, photographer, Maurice Lemaître directed his first film, Le film est déjà commencé? in 1951. With this open piece of "public participation", he revolutionized cinema, renewed the notion of the avant-garde and invented a new form of spectacle, the "syncinema", which foreshadowed the happenings of the sixties.

From the mid-sixties to the present day, Maurice Lemaître has produced a work of cinema that today stands out as one of the major axes of his creation. Author of more than a hundred films and filmic actions, the artist has undertaken to explore through cinema all the dimensions of filmic creation. Thus, conceptual films alternate with work on the material, performances or dysnarrative essays, the artist often being a pioneer in each of these fields.

Œuvres de cinéma (1951-2007) brings together all of Maurice Lemaître's film settings, projection instructions and screenplays. The sum of these writings and documents provides a great amount of information on the procedures put in place by the artist. In addition, the panoramic view offered by this book over more than half a century of Lemaîtrienne's creative work allows us to grasp both the plastic force and the theoretical and political coherence of his work. It also shows that there is indeed an incomparable Lemaître "style" that makes him one of the major filmmakers in the history of avant-garde cinema and 20th century cinema in general.