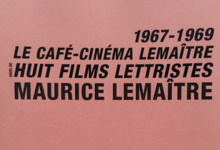 At the end of the sixties, Maurice Lemaître was a pioneer in animating a film club where many avant-garde films, then invisible, were shown alongside his own, from Man Ray to Germaine Dulac, Len Lye and Ian Hugo. During the same period, he conceived and directed eight "Lettrist" films, veritable gems of cinema, which placed him among the major artists of his time.