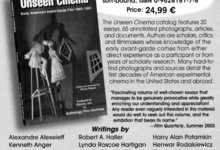 The Unseen Cinema catalog features 30 essays, 65 annotated photographs, articles and documents. Authors are scholars, critics and filmmakers whose knowledge of the early avant-garde comes from either direct experience as a participant or from years of scholarly research. Many hard-to-find photographs and sources detail the first decades of American experimental cinema in the United States and abroad. It serves as a needed supplement to the actual films and provides extensive information and context to the works.

"Fascinating volume of well-chosen essays that manages to be genuinely provocative while greatly enriching our understanding and appreciation! Any reader even vaguely interested in this material would do well to seek out this volume, and the exhibition that bears its name." —Film Quarterly

"The most interesting histories are those which dispute prevailing narratives or reclaim a past that is in danger of being lost. Indeed, the essence of historiography is discursive and cultural struggle--the preservation, revision and contestation of a consequential past--not the accumulation of polite footnotes in academic volumes. Unseen Cinema: Early American Avant-Garde Film 1893-1941, a joint project of Anthology Film Archives and the Deutsches Filmmuseum in Frankfurt, offers one such undertaking. Curated by Bruce Posner, the travelling program of films--a staggering 22 hours' worth--is a rare attempt at both historical revision and preservation, and if things go well, one which is likely to provoke both controversy and interest in a long-neglected corner of film history. When Bruce Posner began seriously pursuing the idea of restoring and programming a 16-part series of films which contradicted the canonical history of pre-WWII American avant-garde cinema, not everyone was enthusiastic about the idea. According to Posner, people's first response inevitably came down to who are these guys and who are they kidding? This is a major financial undertaking in an area of film that nobody cares about! To make matters worse, the conventional history of avant-garde cinema maintains that there was only scattered avant-garde activity in the U.S. prior to 1943, when Maya Deren made her celebrated film-poem, Meshes of the Afternoon. The films that Posner wanted to show were not merely obscure or forgotten--though many were both--they were films that couldn't be accounted for by conventional histories; films that, in some cases, shouldn't have even existed. History is always ready to accommodate new pieces of familiar puzzles--a missing reel salvaged from a dusty corner of the archive, a shooting script with handwritten notes by the director--just as long as they support the logic of chronological progression from past to present. But what are we to make of films that radically disrupt accepted timelines and comfortable historical narratives? What about films which demonstrate styles, techniques or concerns that are not supposed to have been invented (or imported) until years or decades later? How can we account for what appears to be a Structural film that was made in the 1920s, for example, or a Hollywood director who uses the industry for personal experimentation? It is just these types of aberrations--exceptions to the rule, anachronisms, and stylistic corruscations--that form the heart of Unseen Cinema." --Steve Anderson --The Independent - "Seeing Is Believing."

"Anthology Film Archives' recent DVD collection, Unseen Cinema: Early American Avant-Garde Film, 1894 1941 [2005-2014], offers nothing less than a fundamental redefinition of American avant-garde film and an expansive, iconoclastic vision of experimental film practice that should be enthusiastically welcomed by anyone invested in widening the cultural playing field of the modern. This final fruit of a much broader project of scholarly revisionism is, aptly enough, immense. With a running time of over nineteen hours, and including 155 films, many of which are rare and previously unavailable on DVD, Unseen Cinema [and the accompanying catalog] hopes to make part of its revisionist argument about the early American avant-garde that such a thing, in fact, existed before Maya Deren through sheer volume. Size matters, then, but so does style, and the collection's surprising choices and irreverent juxtapositions add up to a kind of modernist Wunderkammer with the sympathetic expansiveness of Whitman's catalogues and the campy curiositas of Guy Maddin. Alongside canonical works like Paul Strand and Charles Sheelers Manhatta (1921) or Dudley Murphy and Fernand Léger's Ballet mécanique (1924), this embarrassment of digital riches finds room for early cinematic innovations; the cine-juvenalia of Orson Welles; Hollywood mavericks like Busby Berkeley, Slavko Vorkapich, and Robert Florey; corporate documentaries; the home-movies of one Archie Stewart, a car dealer from Newburgh, New York; and the cinematic debut of a lantern-jawed, inevitably bare-torsoed twenty-four-year-old Charlton Heston in David Bradleys Peer Gynt (1941). As astonishing, as dazzling, and as seemingly inexhaustible as those eye-popping Busby Berkeley dance numbers that feature so prominently in it, Unseen Cinema is a major achievement in film preservation and film history. It is also an indispensable archive for the explosion of scholarly interest in cinematic modernisms, modernism s visual culture, and the place of cinema in the cultures of early twentieth-century modernity. The Unseen Cinema box set is only the most public product of a broad international effort of film preservation and a decades-old project of revisionist film historiography. Spearheaded by Anthology Film Archives, the archival and preservation work has drawn on, while making preservation masters of, films from the world's leading film archives, including the Museum of Modern Art, Anthology Film Archives, the George Eastman House, the Library of Congress, the British Film Institute, Deutches Filmmuseum, and a range of regional archives. The preservation campaign was accompanied by Unseen Cinema, the traveling international film retrospective curated by Bruce Posner, independent filmmaker and historian, who has also edited the accompanying exhibition catalog. The ongoing exhibition itself premiered in 2001, and has now toured over fifty universities, museums, and archives worldwide, including most recently the Netherlands Architecture Institute, the Fine Arts Museum of San Francisco, and visits the National Gallery of Art in Washington, D.C., in the spring of 2007." --Justus Nieland --MODERNISM / modernity - "Archives of Modernist Cinephilia"