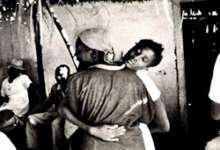 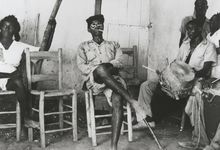 « In September 1947 I disembarked in Haiti, for an eight-month stay, with eighteen motley pieces of luggage; seven of these consisted of 16-millimeter motion-picture equipment (three cameras, tripods, raw film stock, etc.), of which three were related to sound recording for a film, and three contained equipment for still photography. »
-Maya Deren

« When the anthropologist arrives, the gods depart.' So declares, I am told, a Haitian proverb. Maya Deren, on the other hand, was an artist: therein, the secret of her ability to recognize ‚'facts of the mind' when presented through the ‚'fictions' of a mythology. Her avant-garde films, composed before her first trip to Haiti, had already testified to her understanding of the pictorial script of dream, vision, and hallucination. She went first to Haiti as an artist, thinking to make a film in which Haitian dance should be a leading theme. But the manifestations of rapture that there first fascinated and then seized her transported her beyond the bounds of any art she had ever known. She was open, willingly and respectfully, to the message of the speechless deep, which is, indeed, the wellspring of the mystères. And so it was that when I first met her, just following her plunge into what she has named "The White Darkness" she was in a state of high exaltation. »
-Joseph Campbell