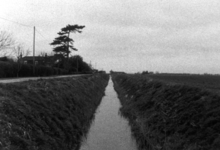 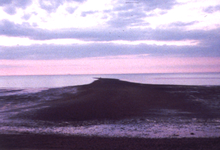 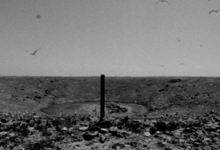 Three distinct locations are brought together in this film Three Studies in Geography (2011), which encompasses three previously separate films made over the last ten years. Each location presents a particular balance of land, sky and water. The first part of the film is a study of the irrigation canals of south Lincolnshire. The camera is always static and the framing is always the same. Part two of the film focuses on a naturally forming jetty on the north Kent coast. The 'street' is filmed at low tide over the period of a month - its shape being determined by the daily shifts in tidal patterns; sometimes more of the street is seen, sometimes less. The film's final part is a study of a circular man-made island off the east coast of England. The island was part of a trial in the early 1970s to see if fresh water could be collected from nearby rivers and stored out at sea. Seawater eventually permeated the island and the project was abandoned. It has since become a bird colony. The final section of the film is a circumnavigation of the island in 36 shots. The soundtrack is a continuous recording made while walking around the island.

Neil Henderson's work has encompassed multiple projector pieces, experiments with the materiality of film and photography, and films about landscape. His work has been shown at Diversions Film Festival, Edinburgh; the Onion City Film Festival, Chicago; Kettle's Yard, Cambridge; Anthology Film Archives, New York and Modern Art Oxford. In 2009 his film Circles was shortlisted for the Jerwood Drawing prize. His work is discussed in Nicky Hamlyn's Film Art Phenomena (London: BFI, 2003). He studied at the Kent Institute of Art and Design and the Slade School of Art and teaches Film Studies at Anglia Ruskin University, Cambridge.

Extras: Postcard image: an extreme close-up photograph of a map symbol depicting the location of the final landscape feature in the film.