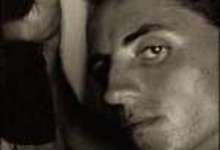 LIFE WITHOUT DEATH
THE CINEMA OF FRANK COLE

His picture can be found in the Guinness Book of World Records, an award Cole was granted after crossing the Sahara desert on a camel. When he was murdered by thieves in Mali during his final crossing in 2000, it took months to positively identify the body, and the killers were never found.

Why did he choose to go so far and endure such hardships? That question, addressed through years of training and discipline has led to a singularly luminous oeuvre of films that have spread the name of Frank Cole across the cinematic landscape.

Each of Coles movies were lavishly documented, and the book draws heavily on this photographic archive, reproducing stunning desert vistas and personal encounters in both colour and black and white. The book also contains Korbett Mathews award-winning documentary The Man Who Crossed the Sahara, an hour long DVD featuring clips and interviews with those who knew him best.