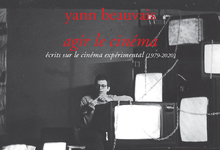 An anthology of the theoretical and critical texts on experimental cinema and moving images written by yann beauvais in parallel with his films and his activities as programmer and curator.

yann beauvais (born 1953 in France) has been a leading figure in experimental cinema since the late 1970s, a "minor" cinema that he has energetically helped to defend and affirm. Formed by studies of philosophy and cinema, he reveals himself very influenced by contemporary art (Russian formalism and minimal structuralism) and music, as well as by his friendship with Paul Sharits.

As a critic, programmer and curator, he was one of the founders in 1982 of Light Cone. In parallel with his film work, yann beauvais has worked tirelessly to build up an artistic field: he has contributed to writing its history and transmitting a founding corpus, to forming a community of authors and spectators, to circulating films between Europe, the United States, latin America and Asia, while delineating a set of problems that film, as a medium in its own right, had to face. A pioneer of gay and queer cinema, committed to the AIDS struggle, yann beauvais has also questioned the forms of filmic politics and the way in which cinema could become the voice of individuals and minority groups.