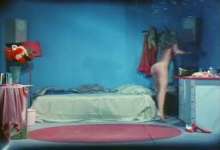 Michel Snow (Toronto, 1929) is considered one of Canada's most important living artists. A prolific painter, photographer, sculptor, jazz musician and filmmaker, Snow's art explores the possibilities inherent in different mediums and practices. He has received many international awards, and his work is shown continually in retrospectives around the world. Whit each piece, Snow invites us to contemplate and put into question his chosen medium, in an oscillation between what is represented its process and material.

« The apparent vertical scratch in celluloid that opens Presents literally opens into a film within the film. When its figure awakens into a woman in a 'real' unreal set, the slapstick satire of structural film begins. It is not the camera that moves, but the whole set, in this first of three material 'investigations' of camera movement. In the second, the camera literally invades the set; a plexiglass sheet in front of the dolly crushes everything in its sight as it zooms through space. Finally, this monster of formalism pushes through the wall of the set and the film cuts to a series of rapidly edited shots as the camera zigzags over lines of force and moving fields of vision in an approximation of the eye in nature. Snow pushes us into acceptance of present moments of vision, but the single drum beat that coincides with each edit in this elegiac section announces each moment of life's irreversible disappearance. »
– Philip Monk, Art Express

Contains a 40-page booklet of texts on the film by Michael Snow, Ivora Cusack, Stéfani de Loppinot and Max Knowles.