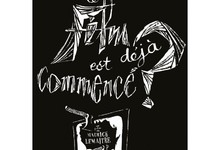 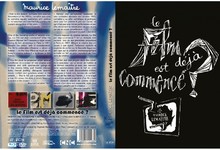 « Heir to the dadaist, surrealist and abstract filmmakers of the 1920s, Lemaître was able to combine equally aesthetics with politics - no easy task and one that fully justifies the current recognition of his work. »
- Gérard Courant, Libération

One of the founding works of lettrist cinema, Le Film est déjà commencé? (Has the Feature Started Yet?) became a major event during its first screenings in Paris in 1951. Despite the critics' lack of consideration, this film's undeniable influence - direct or hidden - on the New Wave as much as on today's cinema makes it a landmark in film history.

« This film must be projected under special conditions: on a screen of new shapes and material and with spectacular goings-on in the cinema lobby and theatre (disruptions, forced jostling, dialogues spoken aloud, confetti and gunshots aimed at the screen...). This is not just a projection, but a true film show, the style of which Maurice Lemaître is the creator. »
- Maurice Lemaître, 1951

Digital Restoration master made by Light Cone and the CNC.