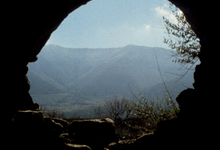 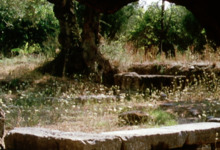 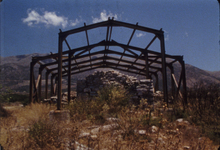 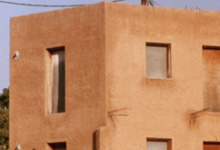 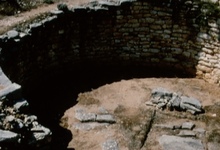 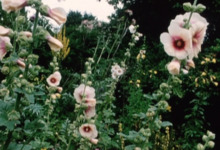 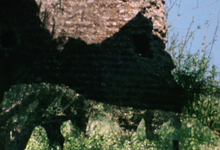 Nick Collins has made films in numerous locations spanning Cornwall, Orkney, London and Sussex, in the UK, to the Cévennes region in France and various sites in Greece. This DVD is a selection of his Greek films, which have focused on ancient tombs, temples, baths and churches. The order of the films on the disk reflects the chronology of the original sites that they document. The last of the films, which depicts the centre of a small modern-day village, highlights the fact the Collins’ eye is always attuned to the present. The evidence that we’re shown of the civic and sacred functions of these different sites, across time, is matched by the filmmaker’s lyrical observations of fleeting moments and the associative links he makes between striking images. An underlying metaphor in the films concerns the openings, entrances, and foundations that are animated by light. An extra film on the disk is Garden, shot in Sussex.

‘Collins has modestly and slowly honed and extended his practice since the early 1980s, and his films are often prepared, shot and then edited over several years. He often returns to sites, he says, with a ‘sense that a place may have a film in it’ long before any film is exposed. That is to say, he has concentrated more on perfecting and shaping his films than promoting them. Any chance to see them screened, or on DVD, should be eagerly seized.’
– A.L. Rees

Nick Collins was born in 1953, and has been making films since 1976. His films, usually made on 16mm film, explore landscapes, human presence and absence and the passage of time. Nick Collins’ films have been shown widely at film festivals in Europe and elsewhere. Prizes include the Grand Prix at Lucca Film Festival, 2007 and the Fuji Award at 25fps Festival, Zagreb, 2012. He is a visiting lecturer at the University of Brighton.