Scratch Focus is an online streaming space that aims to encourage the exploration of Light Cone's catalogue, a constantly evolving collection that is now made up of around 5500 films. Each edition invites you to discover the work of a filmmaker from the collection on our website.

Caroline Avery is an enigmatic filmmaker whose important role within the North American experimental film scene is yet to be widely known. In the 1980s, she was a student at the Massachusetts College of Art (or "MassArt"), the famous Boston school that brings to mind the names of Ericka Beckman, Saul Levine, Luther Price and Phil Solomon, among many other filmmakers and artists. The work of Caroline Avery, with its rich painterly quality, explores a multiplicity of techniques (drawing and painting on film, experimentation with the optical printer, found footage, etc.) and deserves, in our opinion, a larger exposure today. 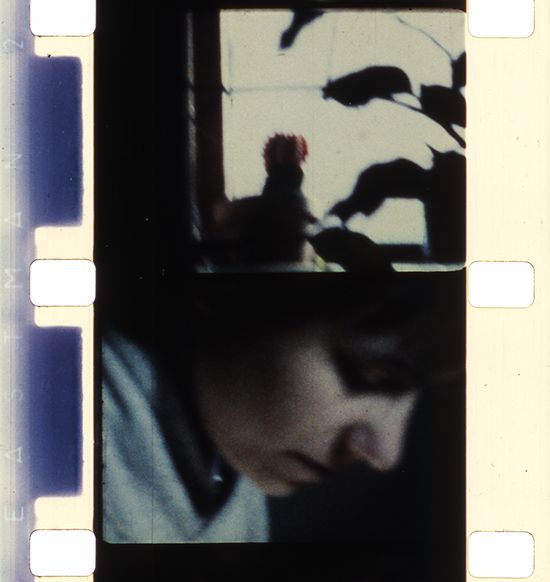 One can trace parallels between the rapid montage, collage and drawing-on-film techniques used by Avery in some of her 16mm films (such as Big Brother, 1983, or Midweekend, 1986) and the work of her contemporaries and friends at MassArt, like Cécile Fontaine and Poli Marichal. What sets Avery’s work apart is her particular attention to the ephemeral nature of things, and the way she explores – or creates – fleeting impressions and gestures with her unique combination of playfulness and rigor. 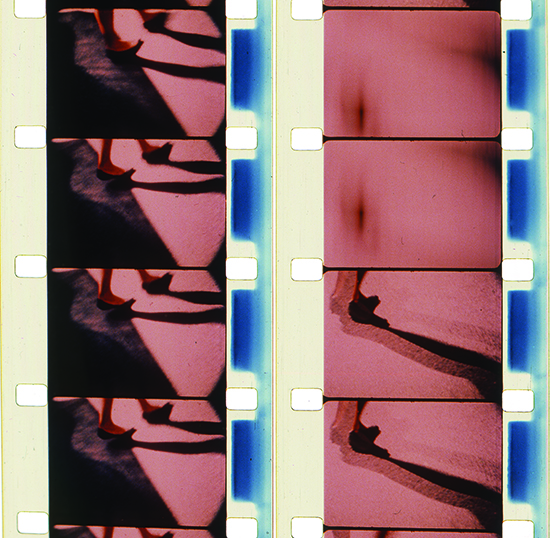 "The Twined Shadow of the Dance. One dancer folding back upon herself."
– C.A.

Readymades in Hades is, perhaps, the film that is most illustrative of Avery’s sensibility. The filmmaker’s camera spies a little girl playing in an abandoned, junk-filled lot in Somerville, MA. Alone among so many vestiges, these "tender little testaments to time's promised destiny of risings and converges" in Avery’s words, the girl plays at organizing the chaos. For the filmmaker, this film "is a testament to the spirit of a little person left to create a world for herself from the trash heap that is back yard. She does the same thing I had hoped to convey."

One could say that something similar is at play when Avery, in Pilgrim’s Progress (1985), works with fragments of advertisement culture – the ephemeral trash of her time – to create vibrant, beautiful forms, strange landscapes where one can glimpse the occasional fraction of a word or an image. 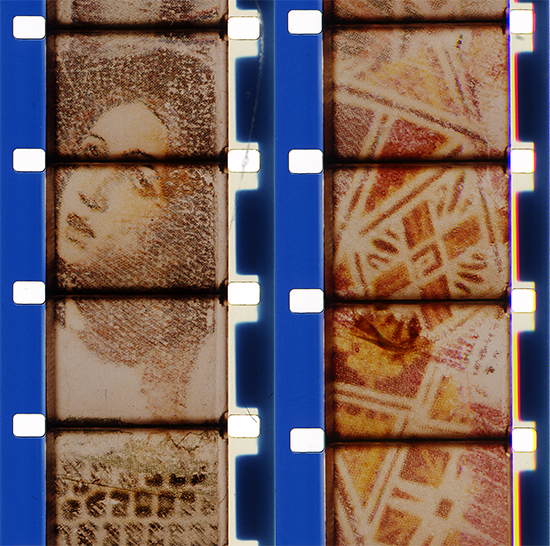 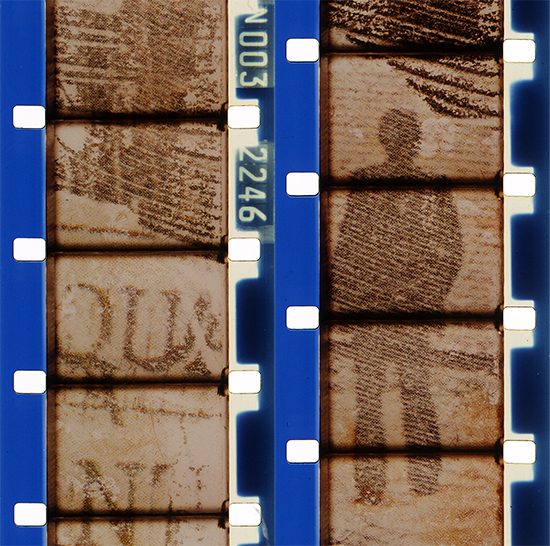 "A discourse on marketing through images. The surface of the film is an abstract potpourri of polyrhythms, named items jumping into recognition here and there. I pulled magazine ink off the page with scotch tape and glued the tape strips onto film leader and rephotographed. It is a tale of coming to terms, or learning to relax and suspend disbelief."
– C.A.


In her films, Avery often juxtaposes painterly shapes and colors with pieces of what look like discarded educational and promotional films (or "ephemeral films" as they are known among collectors). Teetering on the brink between figuration and abstraction, she provokes the viewer to abandon the analytical stance and surrender to the flux of images – to become a little bit more aware of cognitive processes that we do not often acknowledge, which force us to seek out patterns in everything we perceive. As she says, "We are pattern seekers, pattern makers by and large. It is, literally, all in your head." 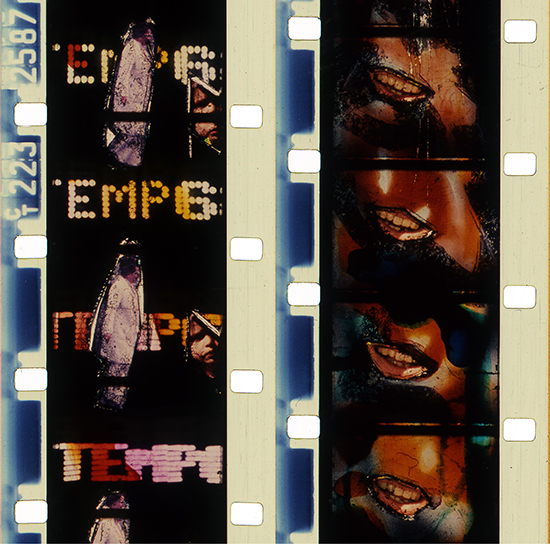 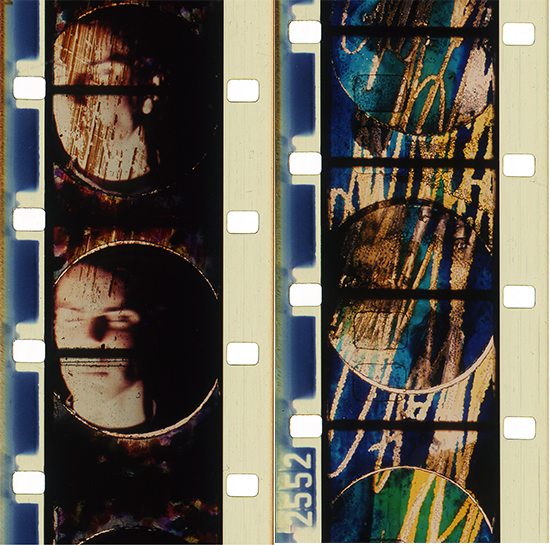 "A comic book/collage film. The images are taken from commercials (35mm and 16mm) and super-8. Sections of the frames were cut out and then placed into super-8 film frames which had been painted upon, a mouth here, a leg there."
– C.A. 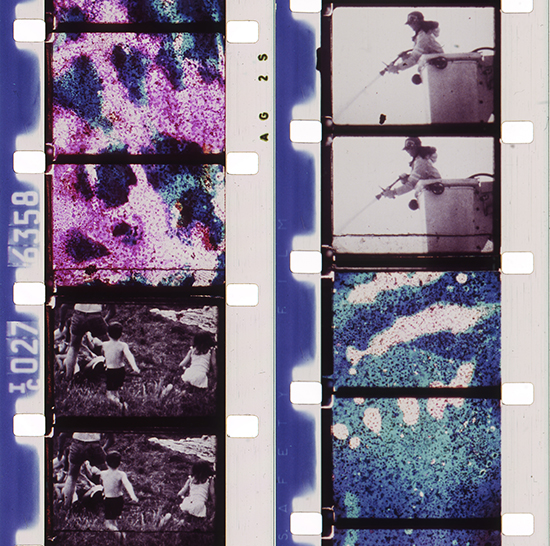 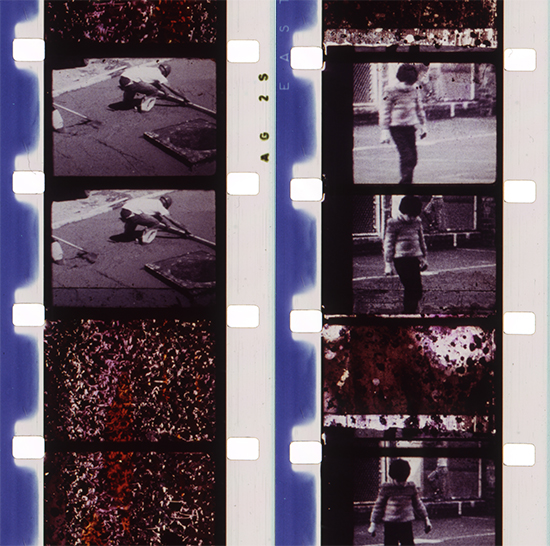 "A statement directed at the limbic mind about secondary forms of communication developed over time to compensate for the cultural denial of primary signals, creating a feed back loop as secondary responds to secondary, leaving the primary, the limbic behind. It is a cautionary tale."
– C.A.


Light Cone distributes Caroline Avery's films, you can see them here.
We'd like to thank Caroline for answering our questions by e-mail.