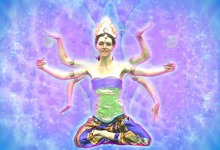 VAJRA CYMATICON, 2013:
Inspired by cognitive psychology experiments of the mid-twentieth century, secret government mind-control programs, and the Hindu concepts of Maya (illusion) and the Shakuna Vimana (UFOs), VAJRA CYMATICON explores in an offbeat spirit the forces of psychological control and self-delusion in an aesthetic that highlights the illusory nature of cinema and the logic of dreams.

LI: THE PATTERNS OF NATURE, 2007:
"Li" is a Chinese word that refers to the underlying intelligence and order of nature as reflected in its organic forms.  This film explores in  non-narrative terms, the myriad patterns and rhythms of nature that are spontaneously generated in the physical world and blurs the distinction between living and inanimate phenomena. Through the use of special cinematographic techniques, including time-lapse and microscopy, the film highlights instances of Li patterning in the natural world, interweaving spatial and temporal rhythms from natural textures and the cycles of birth and decay, night and day, and the seasons. All footage was shot by John N. Campbell, no stock or found footage was used. LI: THE PATTERNS OF NATURE received the Kodak/Filmcraft award for Best Cinematography at the 46th Ann Arbor Film Festival.

FORM AND VOID, 1995:
FORM AND VOID is composed of a rhythmic succession of ink-blot patterns that evolve from simple structures resembling strands of DNA to more complex, nearly subliminal images of plants, animals, demons and mandalas.  Like the Rorschach test that psychologists use to determine a person's state of mind, the film highlights the fact that each of us creates our own reality.

John N. Campbell is an independent filmmaker who received an MFA degree in Experimental Animation at California Institute of the Arts in 1993. In the mid-1990's he worked in the burgeoning field of digital effects.  He has produced dozens of films and videos, many of which have screened at major film festivals including Ann Arbor, Vilo do Conde, 25FPS, Black Maria, Humboldt and Big Muddy.  In 2008 he received the award for Best Cinematography at the 46th Ann Arbor Film Festival for his experimental film, LI: THE PATTERNS OF NATURE.  He received the Director's Choice Award at the 15th Black Maria Film Festival for an experimental animated film, FORM AND VOID. Known for his use of unusual cinematographic techniques, he often employs time-lapsed photography, microscopy, kirlian imaging and cymatic imaging technology in his films that are described as painterly, inquisitive and visionary. In recent years he has produced documentaries for American Public TV.