In order to expand upon the December 7, 2021, Scratch screening Agir le cinéma and to mark the publication of Agir le cinéma – Écrits sur le cinéma expérimental (1979-2020), an anthology of critical texts by yann beauvais edited by Antoine Idier and published by Presses du Réel, we have decided to explore more recent works in yann beauvais’s filmography. In addition to films and installations made in the analog format (Super 8 and 16mm), he has, since the 1990s, experimented with video in a variety of ways: whether filming travel journals on MiniDV (Shibuya, Volta ao longe, Sans titre Beijing, Kopru-Sokagi, Luchando, etc.) or recycling images and sounds found on the internet (Warongaza, D’un couvre-feu, Schismes, Basta), as well as the many works that play with the relationship between text and image using various editing software and hardware (Still Life, Est absente, Hezraelah, P.A.C.I.F.I.C.A.Ç.Ã.O., co vid e, l’installation Tu, sempre, etc.); also worth mentioning are his digital re-visitings of images shot on film (Pan-Bagnat, Meeting Paul in Buffalo, Entre-deux-mondes).

We invite you to watch three films which will be available on this page from December 8 to 22, 2021.


"A short trip to Buffalo in order to show some of my works, invited by Paul Sharits."

“I met Paul Sharits in 1980 during the Hyères festival, which had organized that year a large program of his latest films, unknown in France. A friendship ensued that would be reinforced over the years by many meetings here and there, at various presentations of our respective films. (…) When I discovered Paul Sharits’s films in 1975, thanks to the exhibition Une histoire du cinéma, it was an intense aesthetic shock that was shared, I believe, by a number of young filmmakers of my generation. (…) Paul Sharits proved to possess an extraordinary 'colorist' talent. He allowed color to express itself according to harmonies and rhythms that had never been applied before. Using flicker, he composed temporal color accords that, like Yves Klein’s monochromes, opened up unprecedented spaces and volumes similar to those of allover painting. (…) 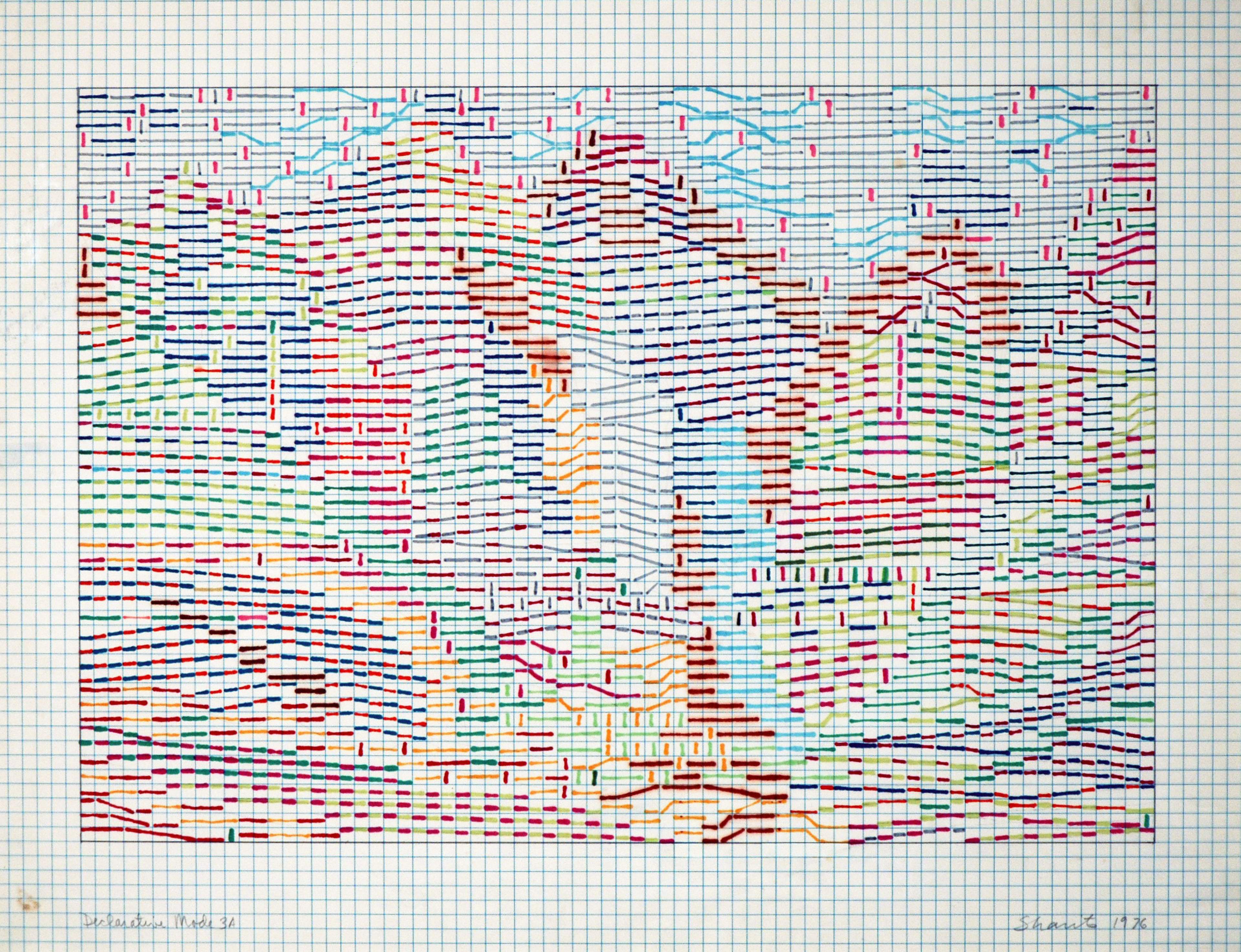 The violence of the images, the opposition between pure color and the photographic image, the use of looped sound, the integration of scratches and burns, all contributed to the perception of the work as groundbreaking by the beginner that I was back then. These films made us experience new temporalities. A specifically cinematographic space opened up, which was never to be undermined, but on the contrary reinforced, by greater familiarity with the work. (…) Paul Sharits’s life has been characterized by upheavals, often violent ones, which have terribly marked him physically as well as psychologically, and which find their expression in his cinematographic and painterly work. This violence can be seen in his treatment of the medium and its extrinsic fragility, as well as in the ways he explores the very limits of cinema.”


"This film puts side-by-side multiple discourses on HIV / AIDS. On the one hand, texts written in English and French (who translates what) appear on the screen at variable speeds and according to numerous rhythmic modalities; on the other hand, the soundtrack carries men’s voices. The discourses and experiences of AIDS intersect and, through fragmentation, bring forward modes of expression that articulate the political subjectively and according to particular visual modalities. AIDS did not disappear with the triple therapy. It is trivialized in order to hide it better. Through confrontation, this film exposes ruptures in our perception of HIV and AIDS."

"Text as image has been a very interesting issue within the moving image since its inception. There are numerous ways to deal with the question of reading in a duration controlled by the maker and not by the reader. The typography is also important, the location on the surface of the screen or into its space. It conveys a lot of different formal and ideological, filmic issues as much as its content leads us to other meanings. Therefore, often the use of text privileges the realm of poetry and word play (see Marcel Duchamp, Man Ray, Jennifer Burford), within a predilection for autobiographical (Su Friedrich), and reflexive (Hollis Frampton, Peter Rose) (…) These ways of making have been totally renewed with the use of computers and motion graphics software. When I said Still Life was a kind of cinétract, I was referring to the use of text as images, within political films, activist films which deal with the possibility to convey a message through dynamic forms. Here comes to mind the works done in the late 20’s by Russian artists and artists a liated to the Bauhaus. But another source lies within a few films made in the 60’s during the different uprisings which took place in the world, and for which filmmakers have been creating forms which are related to cinétract and which anticipate the video activism work made at the time of the AIDS crisis, when it was important to convey a message to concerned population, and mostly counteract the media disinformation regarding HIV and AIDS. Still Life is part of this type of activism." 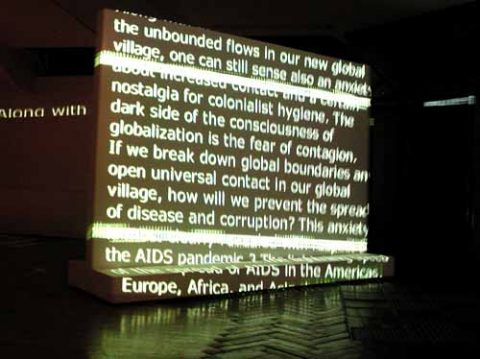 “The rhythms of the flicker, of colors, of the scrolling of text or the apparition of words, of sounds or words, reinforce each other or mutually overlap, yet it is not a frantic cadence: the violence is contained, and in spite of everything a certain serenity transpires. Although a personal and global confusion is expressed, the various treatments of text, image and sound do not compose a vast audiovisual imbroglio. (…) Paul Sharits is mentioned above all in relation to the violence, the violence of a situation and a revolt that is not solely retransmitted but also ‘organized’ to expressive and emotional ends. Both Paul Sharits and yann beauvais intend to affect the spectators but not to crush them (a common effect in audiovisual journalism and in recent cinema). In Paul Sharits’s work, the most radical experimental cinema, which was attached to the movement known as ‘structural’, did not cease to be a vehicle of expressivity and subjectivity. By exploring filmic phenomena – his primary material – he expressed an emotion which went beyond purely filmic (reflexive) problematics, as if condensing a question within its most abstract formal expression (but also exploring it with intention, using organizational strategies analogous to the musical domain).”


"An activist piece dealing with the Palestinians' right to exist. Gaza, March-April 2018."

“A letter, a word, a phrase do not have the same impact once they are projected on the screen. This discrepancy is one of the most singular features of film, cinema calls for its own expansion, excess. (…) We are drawn into a reading that is simultaneously dependent on the organization of the text which no longer corresponds to the usual criteria, as well as conditioned by the speed of the text’s scrolling and apparition. The control is thus external to us, and we have to abandon that in which we have always believed in one way or another: in the communicative power of words that form phrases. (…) The placement or the behavior of the letter, the word, is no longer imprescriptible. Anything becomes possible, again. (…) The question of the letter, the word, is central in my work. The first cinematographic experiment that I attempted consisted in reducing of a Master’s thesis in philosophy to a few word drawings on a film strip, which were intended to replace the necessity to read the dissertation with a cinematographic experience that articulated the very same concepts.”

THOUGHTS ON COMMODITY LYRICISM:
AN INTERVIEW WITH ZACHARY EPCAR

THE POTENTIAL CINEMA OF DAVID WHARRY