With this 10th edition of SCRATCH EXPANDED at Les Voûtes, Light Cone continues its indefatigable exploration of expanded cinema's many forms, and for this 40th anniversary, many of the invited artists are familiar names that have already appeared at previous editions of the event. In addition to installations and cinema performances, the program will include open air 16mm screenings in the Voûtes garden, as well as two programs of film and video pieces taking place throughout both evenings.

This event is part of Light Cone’s 40th anniversary celebrations. If you’d like to attend all of the events, you can purchase a pass at this link.


Meal options will be available for purchase.


A six-monitor installation featuring video pieces from the Light Cone collection. The 1980s were a time of vibrant videographic research, stimulated by Paik and Vostell, and, of course, the VHS. Although the recording industry quickly seized on this possibility to make music videos, the format also allowed for a never-ending possibility of experimentation. This presentation of works focuses on the manipulation of the medium, regardless of the subjects explored. Including pieces by Kiki Picasso, Victoria Keddie, Simon Payne, Kelly Egan, Alain Longuet, Lia, etc.
— Gisèle Rapp-Meichler


Light Cone is a non-profit organization led by a board of directors which has included numerous filmmakers over its forty-year history. This program is a tribute to some of them who have worked on video; it will be presented in a continuous loop on this occasion. 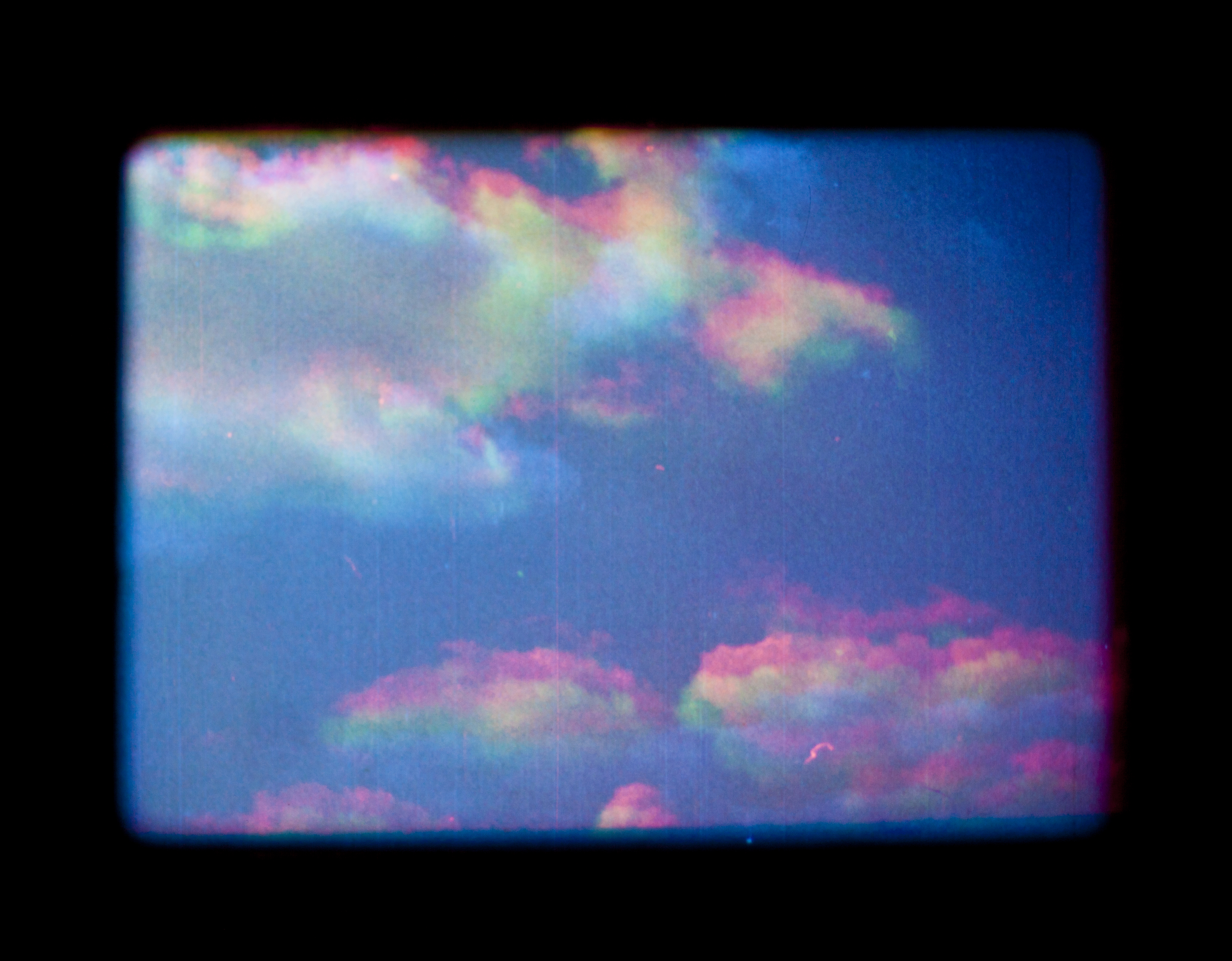 This installation piece involves looking back to the early pioneers of photochemical processes in order to re-imagine and reinvent them in the present. This piece is based on James Clerk Maxwell’s method of additive color mixing that produced the first color photograph in 1861. The process involves placing red, green and blue filters in front of the camera lens, turning a black and white image into a subtly tinted exposure. In this piece, Schmid uses three 16mm loops of clouds, filmed through red, green and blue filters and projected through a filter of the same color onto three staggered screens. The closest screen presents a triptych, with each color presented separately; as it bleeds through onto a second translucent screen further away, the image now overlaps, the clouds sliding past each other; finally, the third opaque screen presents all three colors in one single image, the culmination of the process. A sculptural installation that directs interest towards each individual component. What if color film ceased to exist? Schmid asks this question in all seriousness, and provides an answer of sorts: return to the past and start again…
— Kim Knowles 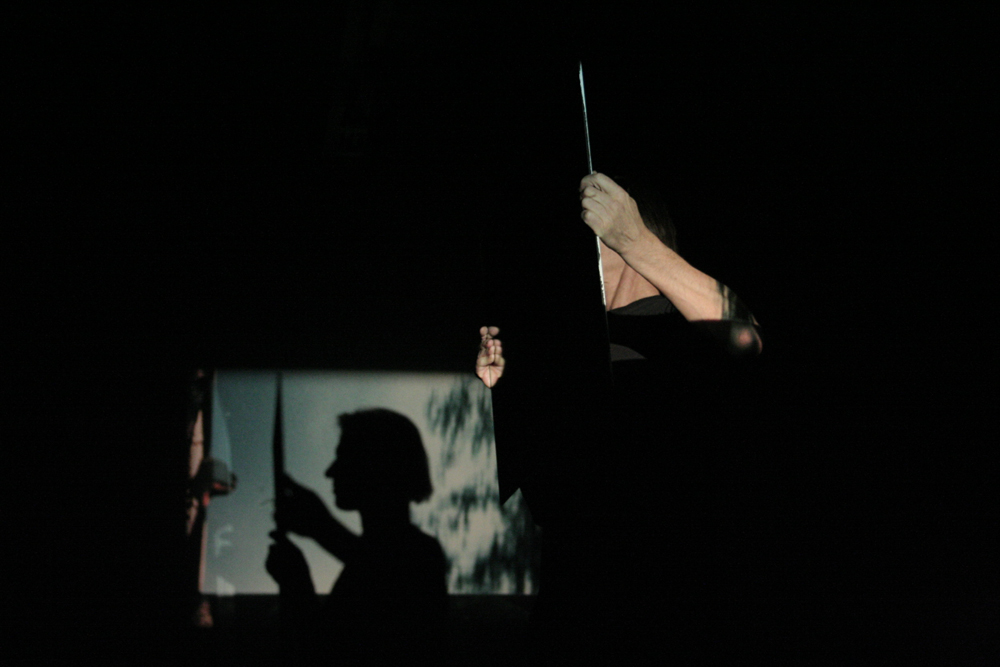 "Man with Mirror is a performance that uses film, a mirror, and a performer. The original 1976 performance was about the illusion of space in film and I was both on-film and live performer since I was readily available. With time however, the performance has taken on that extra dimension — with myself as unwitting protagonist." 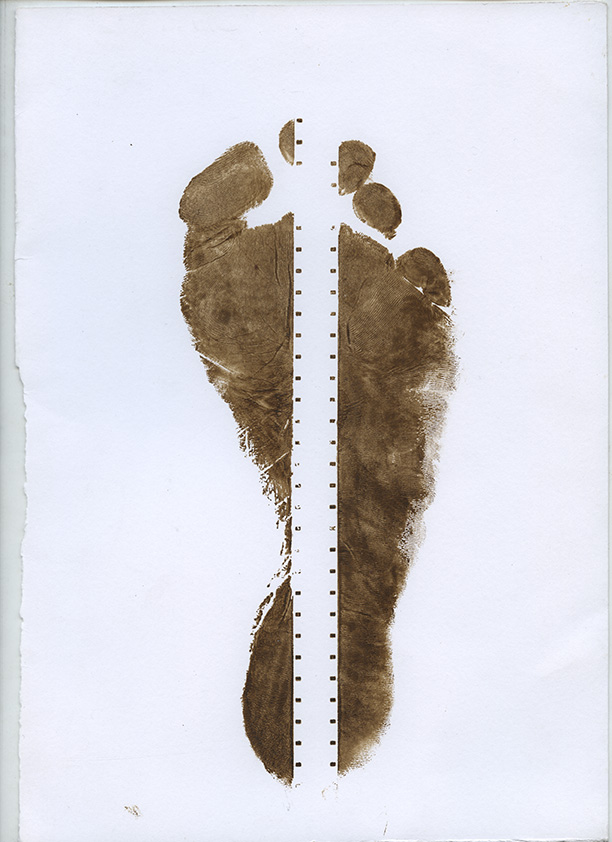 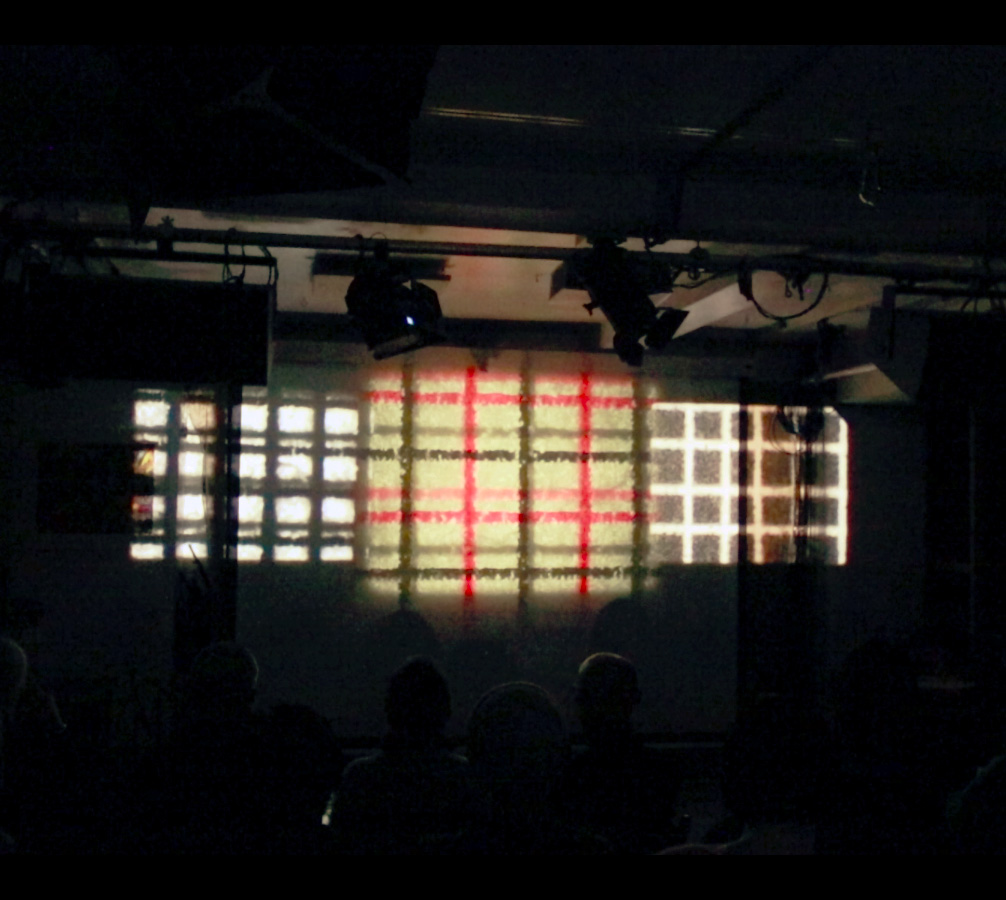 "A handmade film that uses Japanese Washi paper adhered to the 16mm clear filmstrip. It explores lines, shapes, shadows, depth and light through rhythmic changes in the patterns that create both images and sounds in the film. The MM in the title is for the artist Mary Martin from whom I draw inspiration in this series. The imagery also produces the soundtrack from the three projectors mixed live by Guy Sherwin." 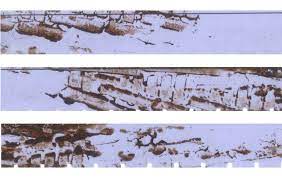 "This physical performance with film reassigns the bicycle into a camera. The idea developed in relation to methods deployed by former tutors of mine who made films and performances from ‘womens’ tools of the sewing machine and the pram to exploit the features these objects shared with the cinema apparatus. This piece continues my research into how to register the image on film without using a camera, and involves aim, balance and pressure. It draws attention to the fallible human body as it wavers from mechanic efficiency and regulation." 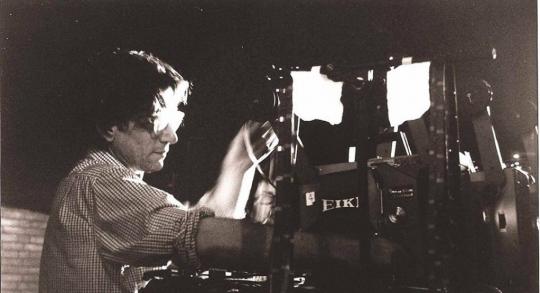 Tower of the Winds is an octagonal marble clock apocryphally dubbed the first weather station. The property features a combination of sundials, a water clock and a weather vane that should not be confused with the Torre de Hércules in Galicia; the oldest extant lighthouse. Bruce's McClure's wind tower metonymically stands for a power saber that slashes through us at the speed of light-sounds. Is “light-sounds” a contradiction of terms? Yes, of course, and “TRUTH” is worthy of recognition too. Referring to the film industry as Hollywood, you are also using a metonymy by calling one subject a name that equates to it. A movie projector is Bruce's favorite instrument since it possesses a separate meaning from its literal definition. The projector pictures perfectly every time servicing both the projectionist and the audience. Tower of the Winds was nominated for an Oscar statuette (copyrighted in 1975) in all current categories but the audience awarded it “Best In Show.” Meanwhile, Bruce McClure received an honorable mention for an imaginative demonstration of an ancient instrument that requires no practice or dress rehearsals. That is because nobody knows for sure what it really is. Projections have no beginning or end; at least not in the biggest sense of the word.


Meal options will be available for purchase.


A program of video pieces curated by Clément Verrier and presented in a continuous loop. 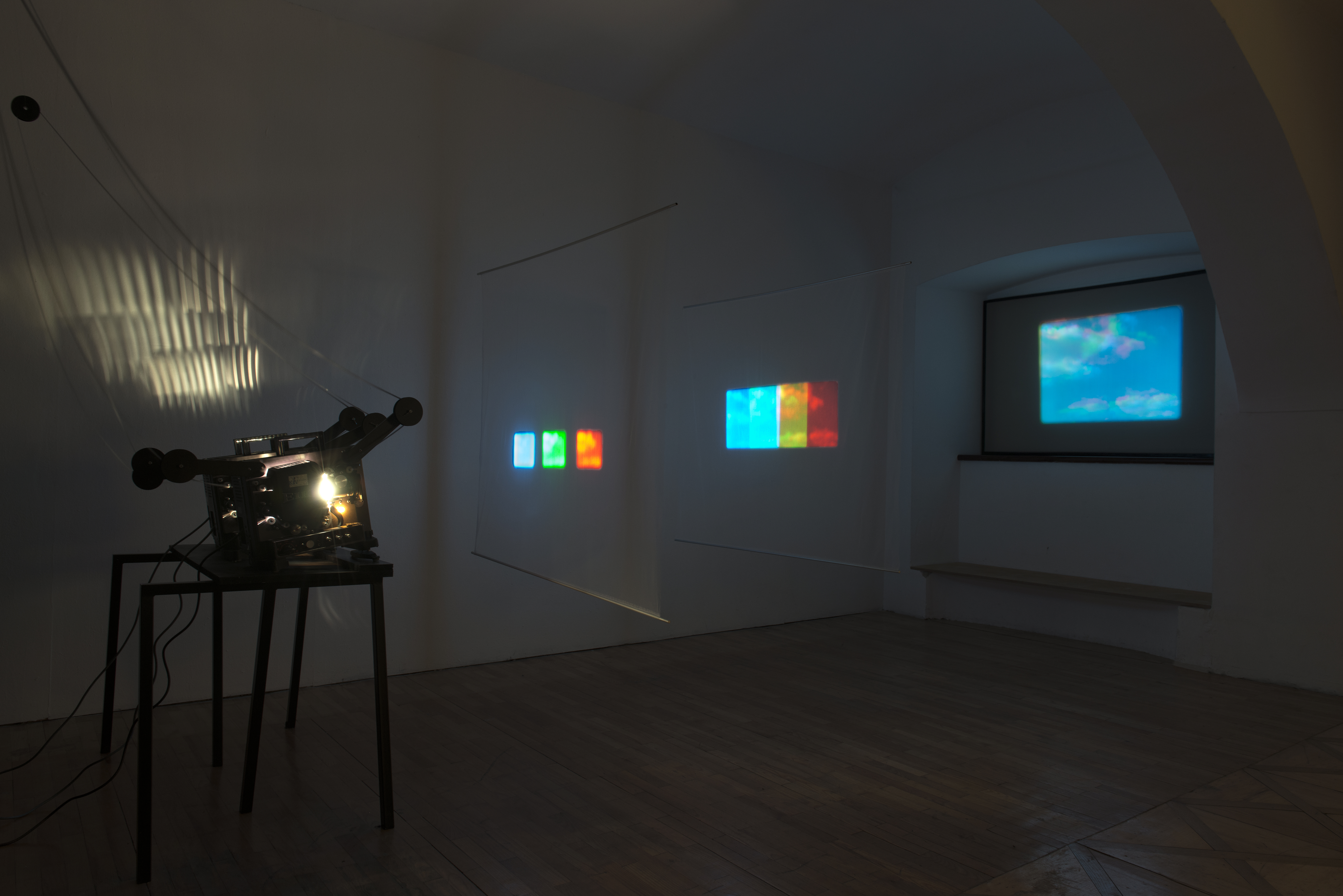 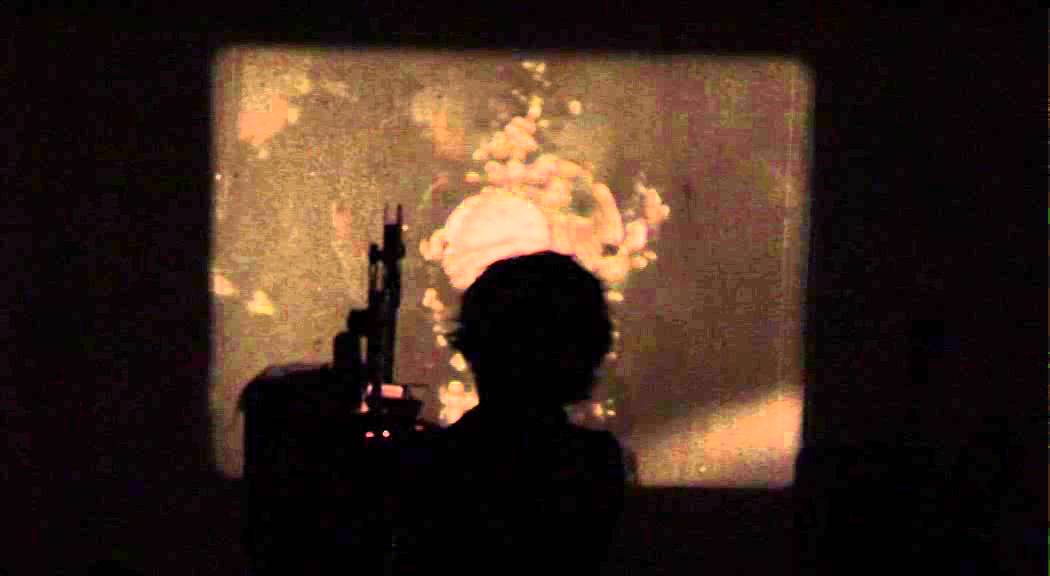 Shown in its original 16mm format, Gaëlle Rouard's latest work unfolds in two acts. First, the "Prelude", whose intrigue rests on a landscape traversed by iridescent Chinese shadows provoking a profusion of sensations. Among the abundant shaggy grass, the pink spot of a thistle that stands out like a tart and sugary treat, like the butterfly that picks from it. Each shot is a tableau vivant, chiaroscuro, Rembrandtesque. Life is incarnated in the emulsion like a new beginning. But, the shadows of death make one pause and reflect, as hinted by the title of the second act, "Oration". The celluloid prism brings perceptions to light, revealing the poetic and narrative force of abstraction. A fitting metaphor of photochemical cinema, elaborated by Gaëlle Rouard in her own laboratory. For many years, she has used it to experiment with particular techniques that make her work unique. 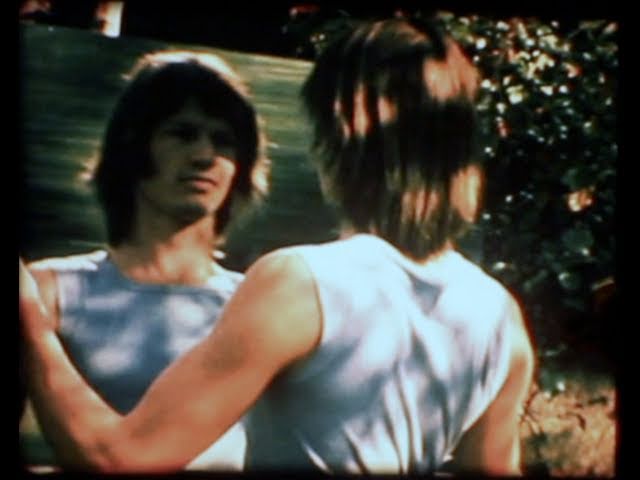 TOWER OF THE WINDS - PART 2 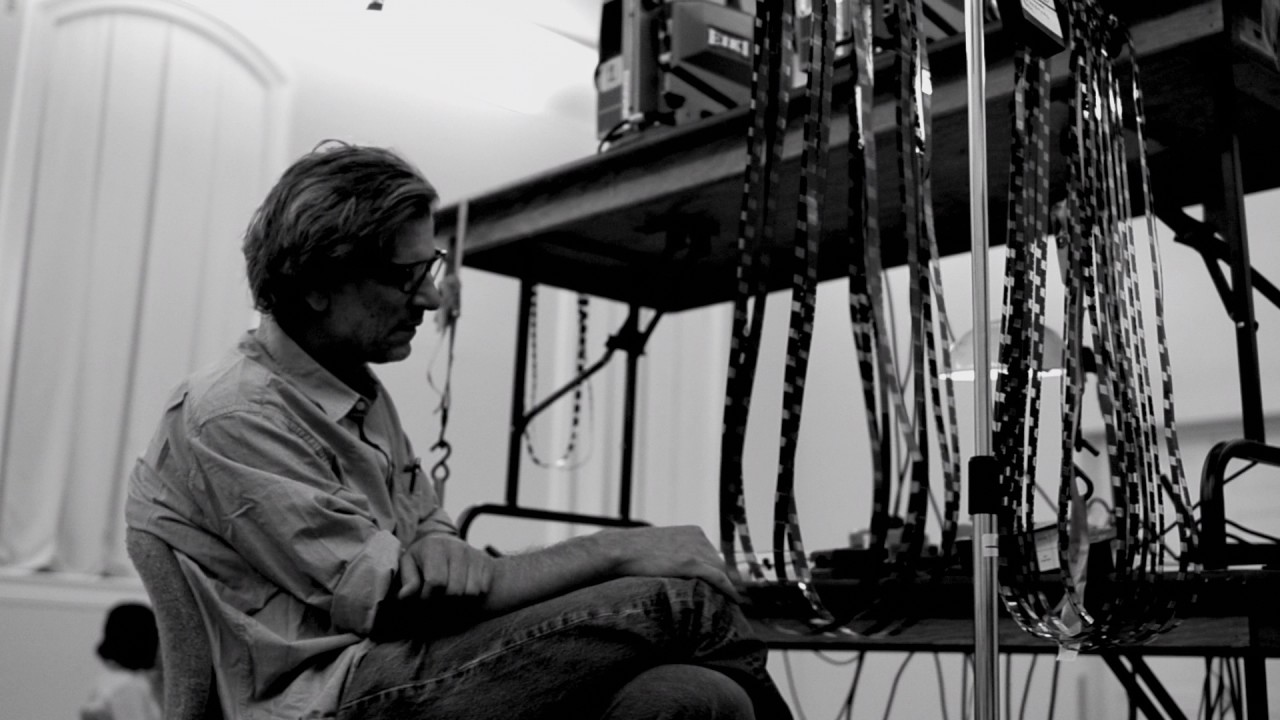 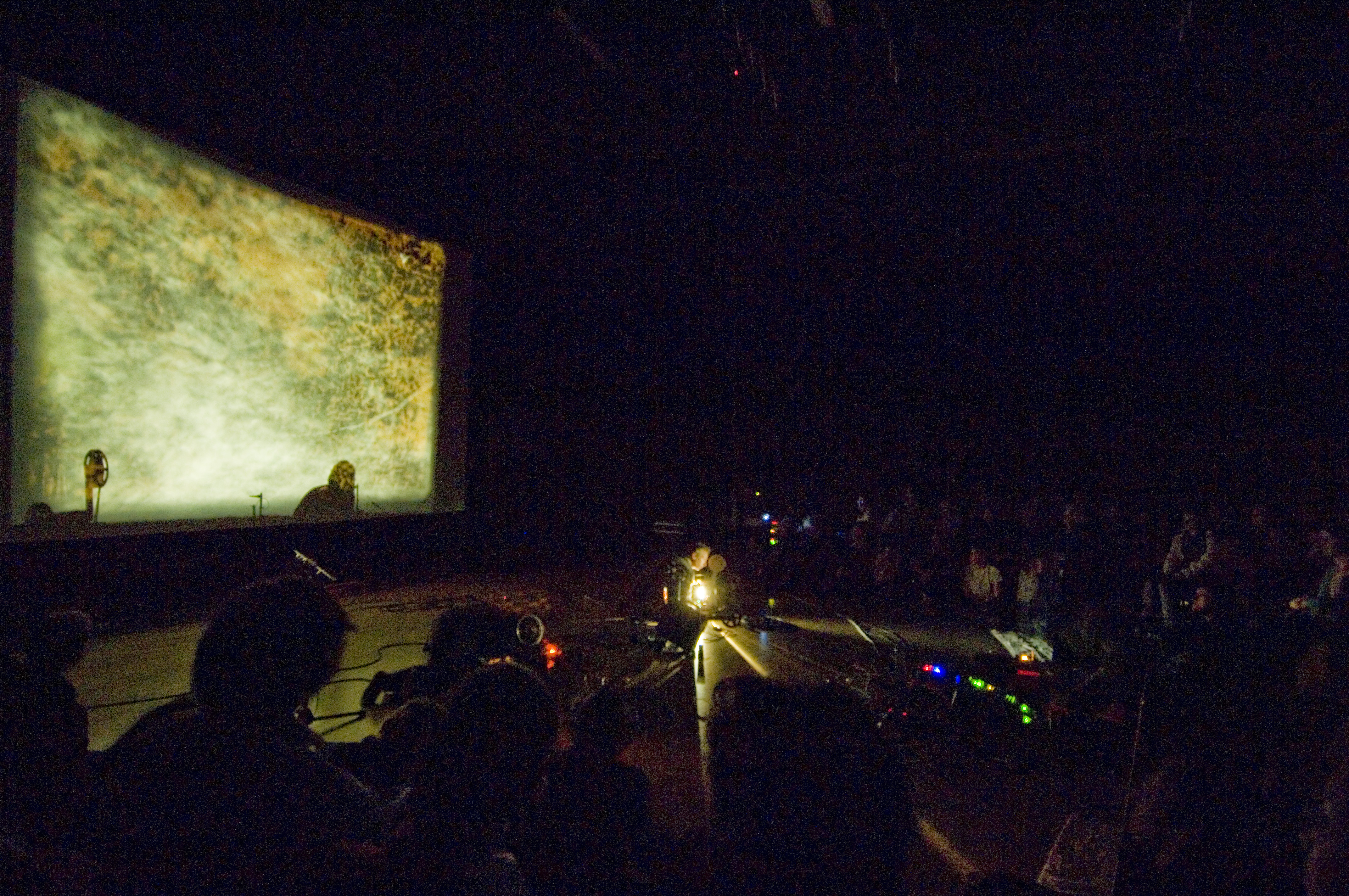 The musician and the filmmakers are on stage facing the public. Two mirrors installed in the space reflect the images onto a screen located behind them. The sound and the images are manipulated live. The Cellule d'Intervention develop an idea of play between image and sound, using the projector as an instrument in much the same way they use the cassette player. Cinema for the ears, music for the eyes.

The Cellule d'Intervention Metamkine was formed by Chritophe Auger, Xavier Quérel and Jérôme Noetinger. Their performances bring together 16mm projection and electroacoustic music in the tradition of expanded cinema. Since 1987, they have presented their work at countless festivals, cinemas, galleries and independent spaces, in France, in Europe, in Canada and in the United States, in Japan and in Australia.